International and national educational standards (e.g. NRC 1996; KMK 2004; Anderson 2007) emphasize the importance to teach knowledge of basic scientific skills as well as of scientific literacy. In order to address these aims, inquiry-based science education (IBSE) is widely suggested to be a good means to implement science learning in school classes, since it is supposed to resemble the work a scientist does (Rocard-Report 2007): Students are involved in generating research questions and hypotheses as well as making predictions according to their ideas. Furthermore, by designing and conducting experiments, students are able to collect and analyze their own data, which is then finally communicated to their classmates (Alcock 2006; Mayer & Ziemek 2006).

Therefore, lessons combining IBSE centered lessons with the benefits of behavioral ecology with living animals might be especially beneficial for achieving meaningful learning. However, teaching with animals is often considered as being difficult, because of i) preparing practical lessons with animals is labor-intensive, ii) fear of teachers to use living animals in classrooms or iii) lack of knowledge of how to combine living animals with behavioural ecology concepts (Spörhase-Eichmann & Ruppert 2004). Additionally, it might generally be considered difficult to incorporate behavioral ecology with animals to IBSE centered lessons.

Therefore, I like to present an innovative unit that can easily be used to combine IBSE with living animals in a behavioral ecology context. For this, students assume the role of a scientist doing behavioral research with insects, thereby reconstructing the scientific way of knowledge gain.

As a behavioral ecologist students are requested to observe living animals and to create an ethogram. An ethogram is a catalogue of all observed behavioral traits that occur during a given set of time. Pupils are encouraged to verbalize their observations and may be engaged in a philosophical talk (after the method of ‘philosophy for children; P4C). In the next steps, the ethogram can be used to formulate testable questions, which are the basis for upcoming hypotheses. Once students generated hypotheses they have the chance to design and conduct their own experiments in order to verify or falsify their presumptions. Finally, at the end of the unit students are supposed to present their research project to the class.

With regard to content, the focus of this unit is variable, since teachers can emphasize the inquiry process itself as well as biological methods, such as observing, or subject-specific topics like evolution and/or selection of behavioral traits. Additionally, this method can easily be adapted to different age stages by variably changing the content and level of difficulty. In the present workshop, I use crickets as an example animal, but the unit can easily be adapted to incorporate any local insects or other invertebrates.

In this workshop I would like to give a detailed overview of the  unit with focus on practical exercises (details are given in table 1). Furthermore, I would like to deal with general questions concerning the use of animals in biology class lessons and share my own experiences I obtained conducting this approach with students. Additionally, in the workshop we will be able to discuss biological concepts, which can be communicated by this unit. 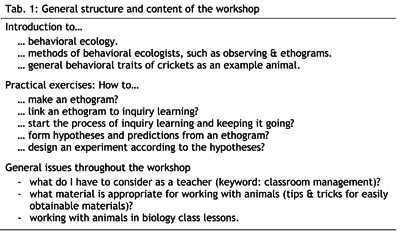